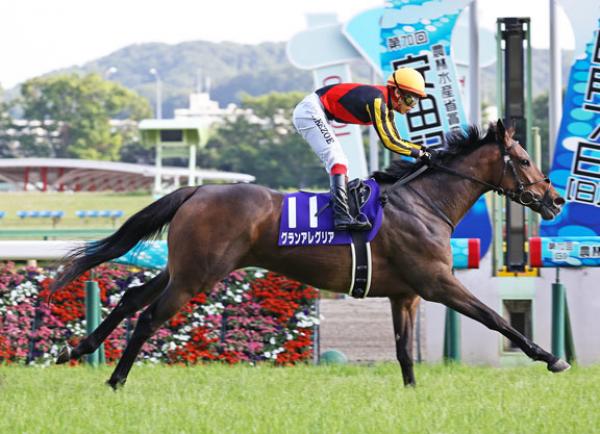 Steered by the country's leading jockey Christophe Lemaire, Gran Alegria cut through the pack from the rear and dashed by in the final stretch to cross the line in front in 1 minute and 8.3 seconds.

The 4-year-old filly by Deep Impact claimed her third G1 victory and improved to six wins in nine starts.

Lemaire and trainer Kazuo Fujisawa both won the race for the second year in a row following Tower of London's victory in 2019. Lemaire claimed his second Sprinters Stakes crown and Fujisawa collected his third.

"I can't believe how strong she is," Lemaire said of Gran Alegria. "She was a little slow to get into the rhythm and we were much further back than expected. But we did not panic if not a little worried that we may not be in time as the pace was fast."

"In a normal situation we may not have made it," Lemaire said. "But she certainly showed what she is made of and she just carried on while some of the frontrunners started to weaken."

The Sprinters Stakes was only her second try at a distance as short as the six furlongs, but, coming in, Fujisawa said he was confident in the still-developing 4-year-old filly.

"I'm pleased with the way she's been moving, and she's showing what speed she has," Fujisawa said after the barrier draw. "She had experience over the trip at Chukyo, where she finished strongly on the outside and could take on the quick horses in that race."

As a 2-year-old, Gran Alegria won her first two starts, then finished third in the Asahi Hai Futurity (G1) at Hanshin. She made only three starts in 2019, winning the Oka Sho Japanese One Thousand Guineas (G1) and the Hanshin Cup (G2) and finishing fifth in the NHK Mile Cup (G1) at Tokyo Racecourse.

After her runner-up showing in the Takamatsunomiya Kinen, she won the Yasuda Kinen (G1) at one mile back at Tokyo in June, her most recent start.