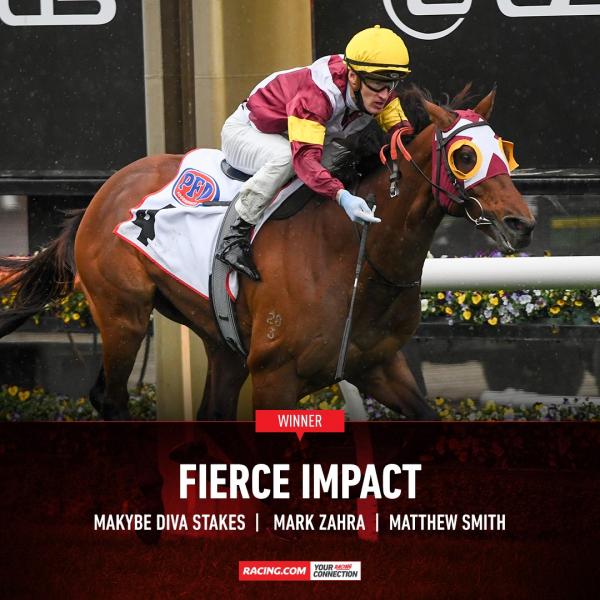 It was a fortuitous 17th group 1 success for winning Zahra whose luck was in and perhaps deservedly so as it was Fierce Impact, then ridden by Craig Williams, who denied Zahra aboard Fifty Stars by a short half head in the 2019 Cantala Stakes.

Zahra was riding Fierce Impact for the first time with Williams committed to Lexus Melbourne Cup (G1) winner Vow And Declare and the in-form jockey was similarly fortunate to pick up the mount on Bobbie Lewis Quality (G2) victor Zoutori with his "usual" riders Jamie Kah and Damian Lane both suspended.

"He's good in a fight. He beat me in a fight here before so it was good to switch and be on his back and on the same side," Zahra said of Fierce Impact in reference to the Cantala.

"My horse actually jumped in and took both the leaders out of play and I thought, 'oh jeez.' I was closer than he normally is but we were going at a hack canter." he said.

"The good draw just gave me a soft run and he did the rest. Flemington suits and a bit of rain helped as well."

Trainer Smith was delighted: "He was super. For a small stable like ours to have a horse like that, it's fantastic," he said. "He's the type of horse that always just does enough. Russian Camelot got the jump on us a bit but given that he's a horse that only does as much as he has to, it was better that he had something to chase.

"Mark rode him perfectly, judged it perfectly, and we couldn't be happier. These races are so hard to win. You can make all the plans, have the horse ready, draw a good barrier but it all still needs to work out. Russian Camelot is a serious horse, too. To fend him off was something."