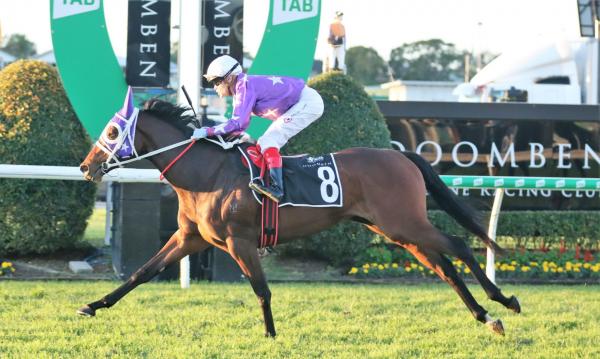 Top jockey Craig Williams is keen to stick with Only Words (NZ) (Sweynesse) in the Gr.1 Queensland Oaks (2200m), believing the filly is on an upward trajectory after taking out the Gr.2 The Roses (2000m) at Doomben.

The Chris Waller-trained three-year-old was coming off a placing in the Listed Gold Coast Bracelet (1800m) and from a good draw in barrier seven, Only Words comfortably handled the middle-distance test to score by 1-1/2 lengths over Bargain (NZ) (Ocean Park), ahead of Charms Star (NZ) (Per Incanto).

The first six past the post were all New Zealand bred, with all bar the Mark Newnham prepared Bargain trained by Waller.

Williams feels Only Words has the right profile to be competitive in the Oaks in two weeks.

“She’s done a few things wrong in her lead-up races and today she did everything right and was quite dominant,” Williams said.

“She will get another good experience from today and most importantly confidence.

“She will line up in a very competitive Oaks in two weeks if they decide to go that way with her and I’m hoping I get the ride.”

Waller saddled up six runners in the Group Two race and they all finished in the top eight, including favourite Grace And Harmony (NZ) (Sebring), who was sixth.

Waller said that while Only Words did a superb job, punters should not give up on the beaten favourite whose cause was hindered by a wide draw.

“Full credit to Only Words, Craig gave her a lovely ride. She was there at the 300m mark and gave a good, solid kick and it proved to be a winning one.”

The win provides a boost for the stud’s exciting young sire Sweynesse, who has six black-type horses to his credit with his eldest just three.

Fifth placegetter Signora Nera, who is multiple stakes placed and sports the Muollo silks, is another daughter of Sweynesse.

“We joined up with a team in New Zealand including Luigi Muollo who bred Only Words. Her previous trainer Clinton Isdale stayed in, so it is a big group,” Waller said.

“I am quite excited by Sweynesse, who raced well in Australia before going to stud in New Zealand. It looks like he can throw a good horse.”

Only Words provided her former trainer Clint Isdale with the biggest victory of his fledgling training career after taking out the Listed HS Dyke Wanganui Guineas (1200m) last year before her purchase by Waller in conjunction with syndicator Star Thoroughbreds.

Isdale, who is originally from Australia, worked for Waller in his formative years.

“Clint was a former employee and managed her very well during her early career,” Waller said.

The Roses is a traditional springboard to the Queensland Oaks run at Eagle Farm on June 5.