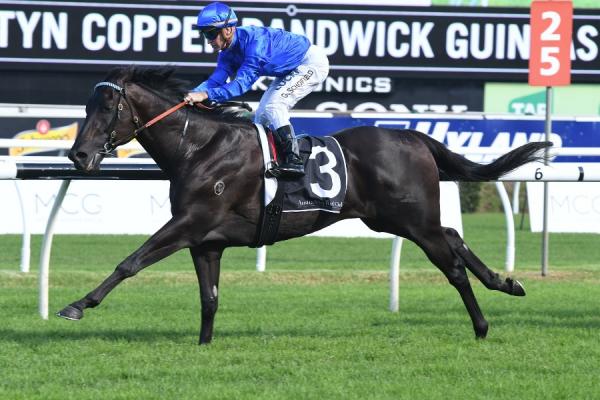 Novara Park’s sire Sweynesse showed why he is one of the most exciting stallions in New Zealand as the only son of Champion Lonhro at stud in New Zealand.

Godolphin’s superb colt Kementari secured the G1 win he deserved when he dominated a high-class field and gave his sire Lonhro a new star in the Randwick Guineas on Saturday, 10 March.

Under a patient and confident ride, Kementari cruised in midfield for most of the 1,600m of the Guineas before being given full rein with 200m to run.

In his previous G1 attempt Kementari had loomed to win the Caulfield Guineas last spring, only to be denied in the last stride.

This time though, he put the result beyond doubt in a few strides as the field topped the Randwick rise, going on to a 1-1/2 length victory that places him among the best of his generation in Australia.

The win was his third from as many starts this time in, the fourth of his nine-race career and by far the most important.

The quality of the horses who finished behind him emphasised the magnitude of Kementari’s win, with the runner-up Pierata by Lonhro’s son Pierro being the winner of a A$2million race and the third and fourth placegetters Trapeze Artist and Ace High both being G1 winners.

Novara Park's Sweynesse was involved in a blanket finish when he competed in the G1 Randwick Guineas when placing second. Managing Director of Godolphin Henry Plumptre at the time commented on the first three home. "These three colts are the best colts of this year and there is probably a half-length between them"".

New Zealand jockey James McDonald was also delighted in Sweynesse's G1 Randwick Guineas performance- "He was awesome. We got back in so his section splits would have been amazing".

Om Sunday 11 March Encryption continued a spectacular weekend in Australia for Godolphin and for his sire Lonhro by winning the G3 Black Opal Stakes in Canberra.

In a hard-fought finish, Encryption got the better of Sizzling Belle close to home to win by a half-length with the favourite Bondi in third place.

Always one of the more forward juveniles of James Cummings’ Sydney-based team, Encryption was placed three times before this breakthrough victory which followed his excellent performance for fifth in the G1 Blue Diamond Stakes at Caulfield.

His Canberra win made him Lonhro’s 73rd Stakes winner and added to his sire’s outstanding winners-to-runners ratio of better than 70 per cent.