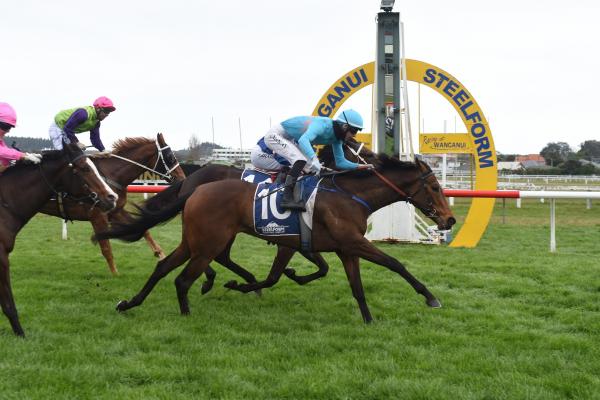 Sweynesse filly Only Words has provided her Te Awamutu trainer Clint Isdale with the biggest victory of his fledgling training career after taking out the Listed HS Dyke Wanganui Guineas (1200m) on Saturday.

Isdale has long had a good opinion of the Sweynesse filly, who raced in strong company as a two-year-old and kicked off her latest campaign with a fresh-up victory at Taupo recently.

Suited by an outside draw on the Heavy10 Wanganui surface, rider Shaun McKay had Only Words idling along nicely in midfield before making a sharp move forward approaching the home corner.

Only Words sprinted quickly to strike the front and despite showing some wayward tendencies in the run home she held out a late charge from fellow northern raider Atishu to win by a neck.

McKay was having his first ride on the filly and was suitably impressed with her effort.

“She seems to be getting better every race and is a filly with a lot of ability,” he said.

“Ashvin Goindasamy has been riding her but when he stayed up north to ride at Te Rapa I got the call and I was really pleased to take the mount.

“Clint said to me before the race to make sure I got her some cover but to take her wider for her run as she doesn’t like going between horses.

“She relaxed really nicely and when I got her to the middle of the track in the straight, she really showed a turn of foot.

“I’m not sure where she will be going next but Clint told me I could keep the ride so I’m thrilled about that.”

Only Words holds a nomination for the Gr.1 Barneswood Farm New Zealand 1000 Guineas (1600m) at Riccarton on November 14 although Isdale, who shares in her ownership, has yet to decide on how he will place her on the way to that target.

“She’s come along way in a short time and has now had two very tough runs back to back,” he said.

“We were using today’s race as a measure against what we might be up against going forward so to win like she did is very encouraging.

“I think the best thing is to put her in the paddock for ten days and let her get over the run and the trip away and then look at what is available to us.

“There are some nice races down south we could go to before the 1000 Guineas but until she has had a little break, I won’t really know what I want to do.”

Isdale was also delighted with the way his charge handled the testing Wanganui track as he believes she will be just as effective on firmer ground.

“She won a trial on a heavy track and it was getting pretty wet at Taupo when she won but you’re not sure how they will cope until they race on a surface like we had today,” he said.

“She likes it on the better going as she relaxes well and when you give her one around the bum she just goes through her gears in an instant.

“That is pretty exciting to know as the better tracks start to come around as we have a lot to work with.”