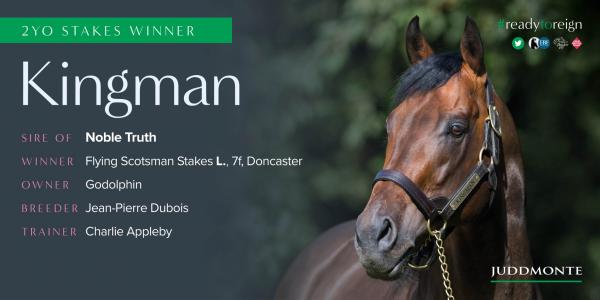 Noble Truth (2 c ex Speralita by Frankel) held on in a head-bobbing finish to the Flying Scotsman Stakes (Listed, 7f) at Doncaster yesterday to seal a win that took his sire Kingman’s (Invincible Spirit) tally of individual stakes winners to 41, while it was the first stakes winner for Frankel (Galileo) as a broodmare sire. The Saeed bin Suroor-trained juvenile was locked in a duel with runner-up Hoo Ya Mal (Territories) through the final furlong but had his nostrils extended when it counted to score under William Buick by a nose, with third-placed Gwan So (Ulysses) a length and a quarter further behind in third. A €1.1 million yearling purchase by Godolphin out of the 2020 Arqana Deauville Select sale, the colt, bred by Jean-Pierre Dubois, had previously broken his maiden at the second attempt over seven furlongs at Newmarket and placed fourth last time in the Acomb Stakes at York (Gr 3, 7f). His dam Speralita (Frankel) is an unraced half-sister to the French and North American champion Stacelita (Monsun) and a threeparts sister to that multiple Group 1-winning mare’s daughter Soul Stirring (Frankel), winner of the Japanese Oaks (Gr 1, 2400m). Juddmonte stallion Kingman stood the 2021 season at a fee of £150,000 (approx. NZ$295,000).