42 SW for Kingman plus hat-trick 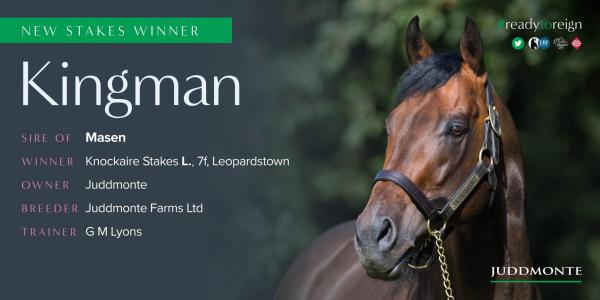 The progression of the Masen has the Lyons brothers excited about next year following his high-quality performance to land the Listed Knockaire Stakes. The 2-1 favourite made all and showed an impressive turn of foot to shoot clear of his rivals early in the straight and was not for catching as he beat Njord by two and a quarter lengths.

The fact Njord was not beaten far by Baaeed and Palace Pier in last weekend's Group 1 Queen Elizabeth II Stakes gives an idea of the upwards direction Masen is heading as he made it a third career triumph from six starts.

Ger Lyons brother and assistant Shane said: "He's still a work in progress and we're really looking forward to him having a nice winter where he can mature mentally. If he winters well, and there's no reason why he shouldn't, we think he'll be a very good horse.

"We think the world of him. Every race that he's run, he's shown a bit of class and he's improved with every race. We're really looking forward to next year and he's a proper horse in the making."

Public Sector (Kingman) won his third Graded race in as many runs on Saturday in the Gr.2 Hill Prince Stakes at Belmont Park.

Public Sector was bred by The Kathryn Stud and purchased by Mike Ryan on behalf Klaravich Stables for 170,000gns at the Tattersalls October Yearling Sale Book 1. He won his debut at Saratoga at two, was second in the Gr.2 Pilgrim Stakes and ran in the Gr.1 Breeders’ Cup Juvenile Turf at Keeneland. He won an allowance optional claiming race either side of a couple of runner-up efforts before going on this winning run, which had taken in the Gr.2 National Museum of Racing Hall of Fame Stakes and Gr.3 Saranac Stakes before Saturday’s win.

Winning jockey Irad Ortiz Jr. commented: "He has a great mind, this horse. He switched off when I wanted him to and when I asked him to respond, he gave me a great turn of foot."