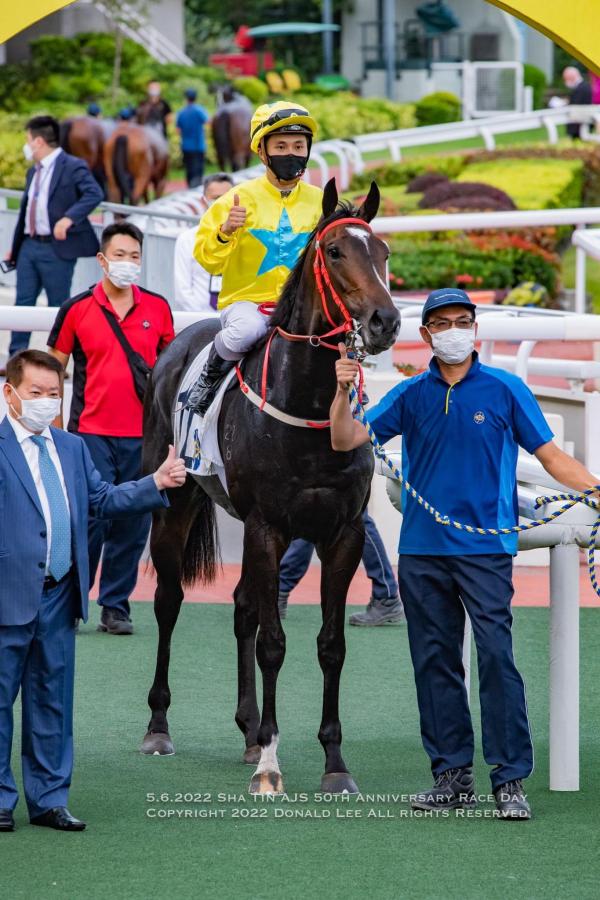 There was a million-dollar finish at Sha Tin on Sunday 5 June as Lucky Sweynesse just got the better of a pulsating duel with Navas Two in the Class Two Beas River Handicap (1,400m).

The winner and runner-up were both chasing a first Class Two victory and the subsequent HK$1 million high-achievement bonus and only a short-head separated the pair at the line.

Exciting three-year-old Lucky Sweynesse scooped the bonus and the winner’s cheque of over HK$1.3 million after sitting just off the pace and kicking clear in the straight before holding on grimly from the fast-finishing runner-up.

Lucky Sweynesse was ridden to victory by Matthew Poon Ming-fai, who was bringing up his 29th winner of the season, and he was delighted to make it into the winner’s enclosure with his first ride on the horse.

“He’s a young, improving horse and he just needs more racing experience to learn how to settle and he will be an even better horse,” Poon said.

“Today he over-raced a bit and was a little bit green, but going to Class Two for the first time and 1,400m, I think his performance is terrific.”

Lucky Sweynesse is now officially the second-best horse in Manfred Man Ka-leung’s yard behind the 99-rated Trillion Win and victory at his first attempt over 1,400m raises the possibility that he could be aimed at the four-year-old series next season, with Man having plenty to look forward to.

“We needed to give him a chance to prove himself at Sha Tin,” Man said. “We knew he had a chance but it is difficult to win as he is now racing in Class Two, it was his first time over 1,400m and his first time at Sha Tin, so there were a few challenges for him.