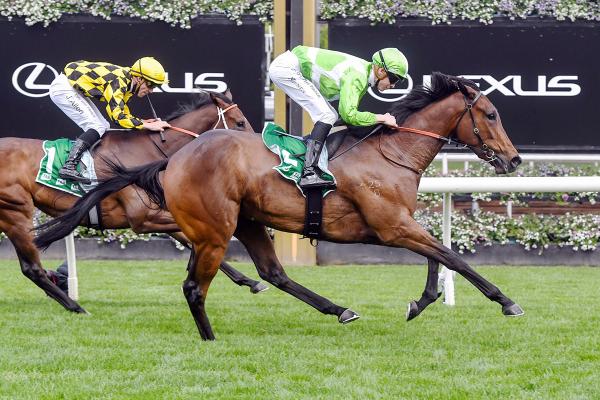 The daughter of Jakkalberry caught the eye when closing for third in her previous start in the Gr.2 Thousand Guineas Prelude (1400m) and was perfectly ridden by Jye McNeil on Saturday.

Sitting just behind the speed before angling clear in the straight, the lightly-tried filly was strong through the line and could be aimed at the Gr.1 VRC Oaks (2500m) this campaign.

“She’s a filly that should keep getting better as we step her out in trip so we’ll give the Thousand Guineas (Gr.1, 1600m) a thought but a race like the Ethereal (Gr.3, 2000m) might suit her a bit better.

“I think she’s got the constitution to cop a prep to head towards an Oaks so we’ll give that thought.

“Andy Williams and Brad Taylor sourced this filly from New Zealand. I was querying her attitude behind the gates and she has given us a bit of grief, but we’ve always thought she would get out to a bit of a trip.

“We did a DNA test on her which said that she’d probably be suited out to 2000m. We may look to head that way but it is her first preparation and we’re mindful of looking after her for the autumn.”

Now the winner of two of her four starts, Elusive Express was bred by Novara Park’s Luigi Muollo under his Explosive Breeding Ltd banner.

Elusive Express had two trials for Te Awamutu trainer Clint Isdale and caught the eye of Freedman’s Racing Manager Brad Taylor in her initial 800m trial at Te Aroha last December, and again in her runner-up effort behind Funny Girl in an 800m heat at Rotorua in March.

“Between myself and Andy Williams (bloodstock agent) we bought her off that Rotorua trial and I sold her amongst stable clients,” Taylor said.

“I liked her first trial but just waited and she ran second to Funny Girl, who has good ability.

“We identified her nice and early for a filly who is going to get over ground.

Novara Park Principal Luigi Muollo has retained a share in Elusive Express and Taylor said he could be in for another exciting season courtesy of the filly.

“Luigi is still in the ownership, so it is good to have him part of the stable,” Taylor said.

“He breeds plenty of nice horses and he has had plenty of success over here with the likes of Explosive Jack, Signora Nera, and Only Words.

“Hopefully we can add another Group One for him and he can enjoy being part of this filly.”

By the ill-fated stallion Jakkalberry, sire of last season’s three-time Derby winner Explosive Jack (NZ), Elusive Express is out of the Elusive Quality mare Braided, who is also the dam of the Listed winner Condo’s Express (Rubick).