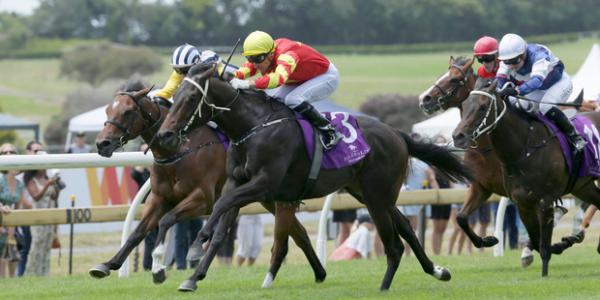 Stephen McKee's chances of defending his Karaka Million title were given a significant boost at Ellerslie on Boxing Day. The Ardmore trainer produced Xiong Feng to win the country's richest two-year-old race last season and Star Treasure, who is from the same family and who races in similar ownership, will represent the stable in the Listed feature on January 29."Hopefully, we can all get another result," McKee said. Star Treasure was making his third race-day appearance, when he powered to victory under rider Opie Bosson in Monday's Auckland Co-Op Taxis Juvenile. The Lonhro colt had finished third on debut at Ellerslie, before a tactical change back-fired, when he ran fifth at his previous appearance. "We rode him handy at Pukekohe, where he drew one," said McKee. "He's a very long-legged horse and it probably wasn't the right thing to do." "I told Opie to ride him a bit colder today. He's a smart colt and he won't need to run again before the Million." Star Treasure settled back of midfield from a wide barrier and he lengthened stride impressively in the straight to win going away by three quarters of a length."He's a good colt and I had a lap full of horse turning for home," Bosson said.

Novara Park Stud stallion Sweynesse is also by Lonhro. A grandson of the mighty Zabeel, Lonhro was a Champion 3yo, Champion miler, Horse of the Year and Champion Sire.

Sweynesse is the highest rated stallion from the Zabeel sire line to begin stud duties in New Zealand since Savabeel.